I spent the morning going through presidential data from 1976-2012 available at Cornell’s Roper Center for Public Opinion Research.  We’ve had 10 elections, inclusive of Carter beating Ford in 1976 and Obama besting Romney in 2012.  I created an excel summary of which voter categories show majority support for which Party. 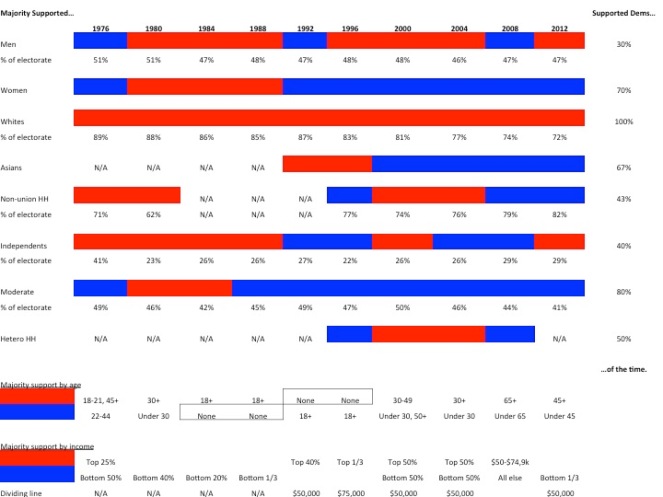 This data is not broken down into sub-categories, but we can infer some general opportunities and obstacles to building a progressive voter coalition.  They focus on the work of white women to build alliances with people of color for a lasting Democratic alliance, and the limits of electoral activism versus broader political activism for the left.

Men are generally reliable Republican voters.  This varies by race, and men now make up just under half of the electorate.  Given racial variation in men’s Republican support, we need to keep drawing out men of color to support Democratic voters, and this means we need to strenuously fight felony disenfranchisement that has removed 6M voting age men from the electorate.  We also need to keep pushing GOTV efforts among young people and young people of color, especially.  Even better, we need to advocate for automatic voter enrollment, and simpler, fairer voting procedures (vote by mail, early voting, more polling stations, weekend voting).  Long-term, we need to abolish the Electoral College and adopt a form of proportional voting, and we need to undo gerrymandering.

Historically, women have been reliable Democratic voters since Clinton’s election in 1992.  This history makes it even more devastating that the majority of white women broke for Trump. White women are a key driver of Trump’s victory, and it is heartbreaking.  We once again have proven we can be a vicious opponent to racial and gender equity.

Democratic governance is not possible without white women finding common cause with people of color.  White women have work to do.  One place to start is to Take the Pledge to support women of color in leadership, and peruse this list of organizations led by women of color to donate your money and time.  Suggestions include the National Domestic Workers Alliance, Black Youth Project, Ella Baker Center for Human Rights, Forward Together, and Southerners on New Ground.  These are progressive organizations receiving less attention that mainstream liberal NGOs (all doing good work, no doubt) who could use our dollars and support.  We also need to work with our “white sisters,” as multiple women of color colleagues have pointed out to me and other white women academics grieving over the election results.  This means reaching out to our sisters, mothers, grandmothers, cousins, and acquaintances who supported Trump, for real, patient, kind but resolute conversation about racial and gender justice.  About #feminism and #blacklivesmatter.  About racism and police violence and immigration and detention and deportation.  About healthcare costs and coverage and jobs and wages and education.  It means supporting campaigns like @Fightfor15.  It means Showing Up for Racial Justice and pursuing anti-racist work.

Above all, we need to find common cause – it is difficult to build alliances without working towards concrete goals.  That might mean starting with basic sick leave policies as a first step towards the more expansive family leave policies many of us in white-collar work would like to see.  It might mean advocating for scheduling fairness and enforcement of recent overtime rules for women working in hourly positions, as part of a broader commitment to making work-life fit more universal.

It also fundamentally means supporting labor organizing and collective bargaining.  Union households were only 18% of the electorate by 2012, down from 30% in 1976.  Union jobs raise wages for all jobs in a sector, and unions are one of the few institutional counterweights to the right. Unions have some blame in their demise, with their often racist or sexist histories, their fragmented “shop floor” organizing, and their leadership that often does not reflect the rank-and-file.  But we need to start from the framework that they are a social good, and that through labor organizing we can modernize, diversify and reinvigorate the labor movement.  This is also an organizational system with enough heft and resources to recruit, vet, train and put forward viable candidates for public office.

(Man, it’s heartbreaking to write all this in 2016, when I was basically making these arguments in 2008.  Will we have any remnants of the Obama years at the end of a Trump-Pence Administration?)

Another item to untangle is the difference between Independent, non-Party affiliated voters, and political moderates.  The former is only 25-30% of the electorate, but the latter is 40-50%.  Most people do not consider themselves liberal or conservative.  My perceptions of the media is that they talk excessively about Independent votes, who broke for the GOP in 6 of the past 10 elections.  But they’re actually a pretty small slice of the electorate.  However, the majority of political moderates have voted for the Democratic president in every election except for Reagan in 1980 and 1984.  THIS is why the Democratic Party tacks to the center.  It is not about Independents, it is about almost half of the American electorate identifying as politically in the middle.  In a two-party, winner-take-all system like ours, we are not going to substantially shift the Party to the left, certainly not in an election year.  But it would be strongly politically preferable for the left to fight with liberals versus the right, and I am honestly at a loss why the left doesn’t see that in its insistence on third party candidates, self-defeating critiques of neoliberalism, etc.

My political views are far to the left of my electoral views, because my vision for an equitable and progressive nation far exceeds what is possible through my limited actions at the national ballot box.  If the left really wants change, they should be fighting for term limits; for an end to the Electoral College; for fairer zoning and education funding and fair housing enforcement to limit residential racial and class segregation that prevents people from knowing one another; for an end to the mortgage deduction and a revision of our budget priorities to more support for affordable and subsidized housing; for an end to felony disenfranchisement, to start with just a few suggestions.  They should continue their fight for single-payer healthcare, prison abolition, public housing, and an overall broader suite of leftist policies that could shift our political debate to the left, and make some of these outcomes feel and seem possible. But election activism in our current system is significantly curtailed.  As long as we have this two-party system, and a sizable plurality of Americans identify as political moderates, then we are going to have this centrist Democratic Party.

My politics are a weird mix of urban Irish machine politics with progressive coalition building.  My political identity is rooted in an ethnic, machine urban politics that has evolved and now feels rooted in and energized by a commitment to building diverse coalitions of people of color, women, LGBTQ, the disabled, and other marginalized groups.  It’s essentially a mash-up of patronage and power for a broad-based coalition of groups.  This means we will fight internally, but that our foundational and moral commitments are to one another, against right-wing, reactionary politics and misogyny, racism, homophobia, anti-urbanism, ableism, and class warfare.  The hardest work white women (and our allies among white men) need to do now is to “de-center” ourselves.  What this means is realizing that this story, this fight, is not about us.  This feels especially hard in this moment given that millions of us are grieving over Clinton’s loss and what we believe Trump’s victory says about our country.  It feels absolutely awful. But fundamentally we have no women’s equality without racial equality. We will never truly have power if it is rooted in white power.

This is the takeaway from this election.  Anything you read about the mythic white working-class should be exclusively devoted to calling out and dismantling its misogyny and toxic masculinity.  Do not bother to read anything else.  But do read all that you can by black, brown, Asian, LGBTQ, disabled writers.  Hear their voices.  Sit with their perspectives.  Follow and engage their conversations on-line, carefully, without making it about you.  Listen and learn.  And get yourself out to racial and gender justice organizing meetings, donate your money, talk with your white women relatives, and show women and men of color that you are worthy of their personal trust and strategic partnership.  It will often be uncomfortable, but ultimately empowering.

(And I didn’t even get to the role of the media in all this!)